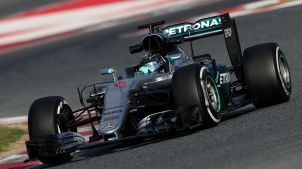 In the build-up to the final Grand Prix of the year in Abu Dhabi little over a week ago, a live interview aired on Hungarian television in which an interviewee said: “I look forward to seeing what happens between those two [Lewis Hamilton and Nico Rosberg} over the next few years”.

Hungarian television is rarely a source for quotes — especially on this humble blog — but I select it not only because Nico Rosberg has now announced his retirement, ending for good his rivalry with Lewis Hamilton and proving that the person responsible for that quote doesn’t know what he’s talking about, but also because it was me, I said that, live on Hungarian TV.

I won’t deny it; this is a shameless plug for the clip found at the link below in which I find myself in a Budapest boozer, selected for whatever reason to appear live on Hungarian television. (Skip to 1-minute, 15-seconds to watch me pretend I’m not drunk). I was over the moon to do it! Despite Rosberg showing the world I have no idea what I’m on about — something my wife could have confirmed a long time ago.

I just didn’t see his retirement coming! But then, nobody did. In an attempt, however, to rescue my dwindling television career, I shall try to analyse what is surely the most surprising retirement in Grand Prix history…

More has been written of Rosberg’s shock announcement than of his championship victory, perhaps more than any other sports story of the year, and I dare say I have read every one of the four-billion words on the matter. It seems his decision to retire has people split; either, they see it as the decision of man too frightened to go up against Hamilton again, taking his trophy and running for the hills, or a sublime decision, perfectly timed and done so with class and grace. For you and my legion of Hungarian fans, here are my thoughts:

In two decades of competing against each other, either in go-karts, lower formulae or Formula One, Nico Rosberg had never beaten Lewis Hamilton to a championship. There is no denying that Hamilton is the more complete driver with more natural talent. Lewis knows that too, which perhaps plays a part in why he lost the 2016 world title…

After winning the title at the American Grand Prix last year, Hamilton seemingly eased off, allowing Rosberg to claim the final three races of the year. Throughout the off-season, Lewis celebrated his latest success, did some jet-skiing, recorded some music and frolicked about with A-list celebrities, safe in the knowledge that his Mercedes for 2016 would once again be the class of the field and he would merely need to beat Nico for a fourth championship, something he believed would be simple.

Rosberg, meanwhile, knowing that he would have to work harder than ever — find within himself new levels of dedication and performance if he was to finally get the better of his team-mate — spent his winter preparing, learning and improving himself. Nothing was left unexplored, right down to the Mercedes clutch/launch procedure, something Hamilton wouldn’t get on top of until late in the year.

Come the opening race of the year in Australia, Rosberg was ready for the fight…but it didn’t come. The somewhat complacent Hamilton didn’t turn up until the fifth race of the year, in Spain, where the two collided on the first lap. Not until Monaco at the end of May did Hamilton gain a victory.

In the early stages of the season Rosberg amassed an enormous 43-point advantage. It swung Hamilton’s way — to the tune of 19-points — before the summer break, just as Hamilton realised that this was a new Rosberg he was up against. The summer break once again saw Lewis take it easy, holiday with friends and take his dogs walking, while Rosberg found yet more levels of effort. When the season resumed, it was once again a seemingly complacent Hamilton who trailed Rosberg.

The engine failure in Malaysia put the final nail in the coffin of Hamilton’s title aspirations but his figurative absence from the championship until May, due, I believe, to his complacency and underestimation of Rosberg’s abilities, put Hamilton on the back foot.

Rosberg, lacking the supreme natural talent of Hamilton, threw everything at 2016, going as far as changing his breathing technique when cornering, altering something that came naturally, all for the slightest improvement in performance. During the press conference following his title success in Abu Dhabi, Rosberg was a spent man, exhausted physically and mentally to the point of tears. And yet, that supreme, super-human effort, up against a complacent and, at times, unlucky Hamilton saw Rosberg win the title by just 5 points.

What were the chances of Rosberg maintaining that level of effort and Hamilton under-estimating the new world champion once more? Slim to none, I say. And Rosberg knows that; retiring at the top of his game was the right choice. It was either that or dig deep once more, risk running himself in to the ground for a second title that may very well never come.

By shocking the world of F1 with his retirement, it’s made me respect Rosberg more than ever before. He’s no mug, in fact his intelligence has won him 23 grand prix and a world championship, and he’s smart enough to know that he probably won’t win another, so he walks away to start a new chapter in his life, safe in the knowledge that nobody can take that world title away from him.

Now, nothing gets an F1 geek wetter than a top team signing a new driver and given the surprise of this one, it’s got us wetter than an otter’s pocket. Who will replace Rosberg at Mercedes?

My heart says Alonso. Dear God, please let it be Fernando Alonso. For the good of the sport, it has to be Alonso! The Spaniard is desperate for that illusive third world title and would put up a fight so ruthless and relentless that even Lewis Hamilton will have to up his game. The disastrous saga of 2007 ended on a cliff-hanger; there was more to come between Lewis and Fernando as team-mates and a repeat of that pairing in equal machinery would be mightily entertaining. 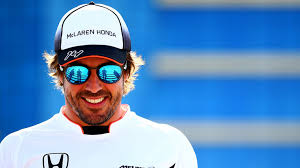 But Alonso has a contract with McLaren…contracts are a fickle thing in the world of formula one and it would surprise few if Alonso, his management team and Mercedes gathered the funds to buyout Alonso’s contract with the Woking-based team. That is of course, if Mercedes want to get involved in a potentially ugly battle to gain the Spaniard’s services and run the risk of the Alonso/Hamilton rivalry blowing up in their face.

Sebastian Vettel has said that his position with Ferrari is “clear”, suggesting that he won’t be leaving the Scuderia for Mercedes any time soon. But it isn’t a flat out denial; is Vettel a serious contender for Rosberg’s vacant seat? Or is Vettel teasing his current employees, a tactic utilised many times before to force a team to up their game and keep their lead driver happy.

Vettel versus Hamilton in the same car is the fight nearly every F1 fan wants to see. Whether it happens in 2017 or not is to be seen.

The easiest option for Mercedes would be to promote their young protégé Pascal Wehrlein. The German currently has no contract for 2017 and is rated highly by Mercedes but his lack of experience and rumoured immaturity form the question marks over his suitability to step up to a front-running team and face Lewis Hamilton.

Daniel Ricciardo has been touted as an option for Mercedes also, despite the likeable Australian having a contract with Red Bull for next year. With next year’s regulations relying heavily on aerodynamics, the Red Bull is favourite to be the car to beat. Would Riccardo run the risk of jumping ship at such a time? Highly unlikely.

What about the recently “retired” Jenson Button? Would he reconsider his decision to leave the sport to return to a top team? You get the impression that Button is at peace with his decision to leave, plus he’s got a somewhat wishy-washy McLaren contract in his back pocket, stating that he may or may not drive for McLaren again at some point in the next 45 years.

There’s Carlos Sainz, too, a driver I rate as highly as Max Verstappen, but for me, the favourite is Valtteri Bottas. Quick but calm, he would cause Mercedes and Lewis Hamilton few headaches. Not to mention that Toto Wolff, head of Mercedes motor sport, happens to be part of Valtteri’s management team. It would mean convincing Williams to release Bottas from his contract but Mercedes can use their engines as a bargaining chip and strike a deal with its customer team.

If I was a gambling man, I’d put money on Bottas, but then I don’t know what I’m talking about — the Hungarians can tell you that.