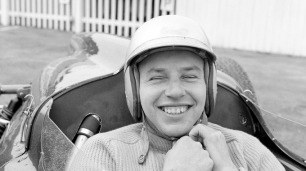 I was on a mission. I was obsessed and I had just one target in mind. I was at the 2013 Goodwood Festival of Speed, the event’s 20th anniversary, and the only thing that would make the day a success was if I met, spoke with and shook the hand of Sir Stirling Moss.

I did just that and it was a magical moment. For me at least. But in the hours of vainly stalking my hero was a another moment, one that got lost in the later excitement. Now though, it comes back to me with poignant clarity…

I had learnt earlier that year how to stalk racing drivers; at Thruxton I had waited outside the paddock toilets for Matt Neal to emerge, just to have an opportunity of a chat and a photograph. Ironically it was the three-time British Touring Car champion who stole my attention momentarily as he wandered by me that day at Goodwood. I had planted myself at the foot of the long path leading the driver’s clubhouse – about the only off-limits area for mere mortals like me – in the hope of scooping up motor sport royalty as they entered or exited.

I watched Matt walk on, together with his team-mate Gordon Shedden and a small group of British Superbike stars, each trailing a throng of autograph hunters. Blindly, I took a step backwards, likely trying to get out of the baking heat and into the shadow of a tree behind me when I felt a bump on my left shoulder.

A voice behind me said “sorry, young man.” I attempted to apologise myself, the bump had been my fault after all but the words got stuck in my throat as a turned and glanced at a beaming grin coming from under a white baseball cap. The cap carried the logo of the Henry Surtees Foundation and the grin and voice belonged to motor racing royalty of the very highest order; John Surtees.

A King had entered the realm of mere mortals and I was the lucky pauper who found himself face-to-face with him. Should I bow or curtsy or something? Whatever the protocol, I only managed a grumble of apology and a nervous smile before ‘Big John’ had given a wink, jumped into a golf buggy and was gone.

You could have knocked me down with a feather as I watched the only man to win world championships on two wheels and four disappear through the crowd. I snapped out of whatever trance I had slipped into and kicked myself hard for squandering such a unique opportunity, for blowing my audience with a King.

Fast-forward three-and-a-half years and I read with sadness that John Surtees has passed away at the age of 83. As hard as I kicked myself that day at Goodwood I’m kicking myself even harder now that the world has bid farewell to racing royalty and I wasted my only opportunity to talk to the great man.

He of course holds that unique record, one likely to never be beaten, as the only man to claim world championship victories on both motorcycles and in Formula One, with Ferrari, no less. But more than his on-track successes John Surtees is likely to be remembered for his efforts with both the Henry Surtees Foundation – named in honour of his son who tragically died following an accident during an F2 race in 2009 – and his work with young British racers through the Racing Steps Foundation.

For me, he’ll be remembered as the one who got away, the one whose very presence stunned me into a mumbling, moronic mess. May ‘Big John’ rest in peace and may I learn from this and grasp any future opportunities to meet great motor racing royals.